I don't need to tell you that the COVID times are strange and weird. There is a lot of uncertainty about the upcoming VT ski season for we Canadians and the temptation of keeping the border closed so we can go heli-sking at half price is pretty high. Not really. It is still very expensive.

Despite all that, some of are keeping the stoke fired up, and Grampa Grindbar, AKY my great-nephew Jason, is among the, He has decided to celebrate his "raised-Jay" heritage in a permanent way. See image and unexpurgated story below. 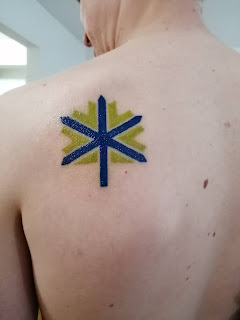 By Grampa Grindbar
As both a proud Jay Peak Alumni and also Sous Chef a tattoo of something Jay was all but inevitable. On the tattoo side the idea's been kicking arround my brain for several years now but only putting serious thought into it for the last 4-5 months. Perhaps I was subconciously waiting until I became the Sous Chef seeing how most people in my position have more tattoo than skin. Originally I was thinking more on the cook side for my first tattoo but nothing seemed to fit right. Then I started thinking skiing, more and more that started to make sense and I was thinking about what that would end up being. Started as getting my current skis but current era graphics are lame and that didn't seem right. Then i thought about getting my K2 Revivals seeing how I ski'd those for the better part of a decade and would still to this day if I still bombed down Jay. Then finally I landed on jay peak itself.
I started thinking about getting the logo since it's easy to execute, and very meaningful to me and realistically the family as well. Then it became a question of if that was all I would get. Strong contenders went to the logo with "raise em Jay" written around it, Also Laura found a company that did stylised trail maps (I might have done that if it had been very obviously Jay, most likely I would have gotten thousands of questions as to why there were so many lines on my back.) Then came when I would do it. As it turns out never.
It took me taking a week off while my friend Josh came over to visit. As we roamed the streets of Victoria he pointed out a cool looking tattoo shop, I (jokingly) asked if they did walk ins, he looked closer and said they in fact did, so knowing I would never do it if I didn't just go in we went in the shop. We went up to the counter, showed them what I wanted done and where and in about an hour I officially became a walkling billboard for the raise em Jay lifestyle. As I write this i still wonder if I should've gotten raise em Jay written on me too.
Before i got in the chair I texted my brother saying I was going to do it, he thought i meant i was making an appointment saying I should get it in the green and blue then was surprised when i texted back saying I did and it hurt. Seeing how most people reading this are my un-tattoo'd family members I will say the first 2 minutes hurt, then it became a nagging annoyance pain. Then 2 days later came the gross part when it started flaking and I was shaking green and blue skin out of my shirt.
As with everyone else who gets tattoo'd now I want more and will take suggestions, that said no im not going to get a headshot of Donny on my chest. Stay tuned for when I take the title of Johnny Jay after these alleged Greek trials that are on the way take place.
Happy Skiing
Johnny Jay Jr/ J-rock/Grampa Grindbar/ Rockpile

Posted by JennyC at 7:40 PM No comments:

by Jonny Jay
Well I had to go, today being the last day before Covid 19 invades Jay. Got there about 9:30 with lots of parking. Didn't see any other vehicle from Quebec and only a few Ontario plates. Very weird. Anyway then I look up and see that the Jet isn't running nor is the Bonnie -- good coverage still but it rained yesterday and now it is cold so they shut it down! Just my luck, the day we are here and no one else is allowed in! I did a run on each of the open chairs -- Taxi quad, Snail and Village, emptied the locker, and was home by 11. Conditions were good as it had  been groomed and nobody there but the edges were very firm and uninviting.

So I kept looking for a sign about the closure (there is a good letter from Steve Wright on the website) but there was not a sign anywhere on the mountain or lodge. So at the end, before I emptied the locker, I checked in with Stateside ticket staff to see if the mountain really was to be closed for the season. The answer was yes so I suggested that a sign on the ticket window might help those who don't check the Jay website every few hours. "Oh that would be a lot of signs and we only made the decision yesterday." Then I suggested that a marker pen and some paper might work but decided to give up as it was too much for the millenial . . .
Supposed to get colder and maybe even some new snow -- probably be an awesome spring!

Posted by Sick Bird Rider at 9:17 PM No comments:

A birthday Family Day at Jay.

Dear Reader, I hope you've figured out that this blog does not support the timeliest of reporting.


Sometimes, you go skiing because of the snow, and sometimes you go skiing because of the people you get to ski with. Sometimes you go for both. This was the case on Valentine's Day weekend at Jay Peak. Jonny Jay was having a special birthday and some Ontario residents of our clan took advantage of the Family Day holiday to make the trek to Jay Peak.

One of the really special guests was the Green Beret, who has returned to the east from his sojourn in the Rockies. This weekend, he was finally able to make a return to Jay Peak and ski with the family. This young man was truly "Raised Jay,"and it was real pleasure to ski with him and his dad again. And try to keep up!

Needless to say, there was a birthday party apres-ski, but I can't say much about that other than that the food was fantastic, excellent gifts were presented, a certain kind of entertainment was provided, speeches were made and that there was alcohol involved. But I can say this. Jonny Jay gave himself a present that no-one was expecting: a new jacket! After 27 years of skiing in his now-very-faded Helly-Hansen shell, he went shopping all on his and revealed a fancy new Spyder coat at the party. Wonders will never cease and the collective gasp was probably heard in Newport.

Jay Peak is back in action.

Well, the mountain is back!

After a good foot of snow over the last few days, following snow last week, everything opened up with skiers on the Face, Canam etc.

Temps of  -20 Celsius this morning but since we had played hooky we ventured up , and lo and behold the sun came out and a bluebird day was the result. Yesterday we left early and got behind stopped cars at the top of the 242 hill so we waited about 15 minutes to get by. Temps kept the on hill traffic down and conditions were great with groomed groomers (big deal at Jay) and lots of snow in the woods ( a few stumps and ditches with the lack of base).
Let's hope the thaws are behind us and the snow will only get better for the rest of the year.
by Jonny Jay
Posted by Sick Bird Rider at 1:38 PM No comments:

Sunday December 1 at Jay was hard and fast. The two+ feet of the week before had softened with rain and then frozen, but I still had to hit the slopes as the sun was out and early season guilt was setting in. First outing for the year, so lugged the gear to the locker and checked the trail guide which stated that only two runs were open on Stateside, the Jet and Haynes. Anyway no crowds.
First run down Haynes was very slick -- no ice just hardscrabble. The Jet looked better but you really had to be on the skis - saw two toboggans with injured skiers in the short time I was there. No access runs were open to the lodge so had to hike back over, up the stairs at Harvey's and down the others -- good workout for the legs and heart! Saw that the UN was actually open, as well as the Derrick, but reports on both were not positive. Then I bumped into someone at the locker who has stupidly gone down Timbuktu only to report that that was a big mistake and that was his run for the day!
All in all, a good time for the first time, lots of base for the winter and they were pounding snow at the bottom. Oh, and the plastic pipe footrest protectors have been replaced on the triple! Wow. . . .

No pics but wouldn't do it justice anyway because the mountain looks great! You would never know it was a bullet-proof surface until you were on it or heard it.
Posted by Sick Bird Rider at 6:40 PM 2 comments:

Last day of the season at Jay Peak

Loyal followers of this blog (I know you are out there) will have noticed a dearth of posts this winter. Long story short, life matters prevented some of us from visiting Jay Peak as often as we'd like, and your humble editor never made it there at all. Harrumph.

Fortunately, our stalwart reporter Jonny Jay did make the trek down the last weekend and sends this report and some excellent images:

Warning this might depress you -- or perhaps it will make you feel mellow for a minute! Saturday was dense fog but a very fun surface with a few inches of corn snow on top of the ice sheet. Sunday the sun came up and I was there skis on the mountain before 9:00! Got a little heavy by 10:30 or else my legs were weak . . . People arriving at 11:00 with parking full. Other than the pictured toughies, the Goat and Northway were superb. No one on the Goat because that side of mountain was closed -- lovely cruising.

Posted by JennyC at 8:30 PM No comments:

RIP Bruce Charron
Tragically at Jay Peak, we have lost a fine man, loyal, full of fun, a good friend and awesome skier. Bruce was a proud family man who lived with passion and pride. He will be deeply missed by all who knew him.

Posted by Sick Bird Rider at 12:06 PM No comments:

Welcome to truth in snow reporting

This blog is a forum for some die-hard Jay Peak skiers who got a little fed up with what they read at the other Jay Peak snow report years ago. It is much better now.

The contributors are all members of a family that has skied at Jay Peak, Vermont, since the late 1960s.

Random Pics from the JJ collection

It's my icicle and you can't have it!